My sister sent me this E-mail, I found it sooo cute so I thought I would share it with you. Let me know what you think . I dont know if I put the thread in the correct topic so do not hesitate to change it if it is not in the correct one.


'Much of life can never be explained but only witnessed.'

NAIROBI (AFP) - A baby hippopotamus that survived the

Tsunami waves on the Kenyan coast has formed a strong

Bond with a giant male century-old tortoise in an animal

Facility in the port city of Mombassa, officials said.

The hippopotamus, nicknamed Owen and weighing about

River into the Indian Ocean , then forced back to shore

When tsunami waves struck the Kenyan coast on

December 26, before wildlife rangers rescued him.

'It is incredible. A-less-than-a-year-old hippo has adopted a
Male tortoise, about a century old, and the tortoise seems to
Be very happy with being a 'mother',' ecologist Paula Kahumbu,
Who is in charge of Lafarge Park , told AFP.

'After it was swept away and lost its mother, the hippo was traumatized.

It had to look for something to be a surrogate mother.

Fortunately, it landed on the tortoise and established a strong bond.

They swim, eat and sleep together,' the ecologist added.

'The hippo follows the tortoise e xactly the way it followed its mother.

If somebody approaches the tortoise, the hippo becomes aggressive,

As if protecting its biological mother,' Kahumbu added.

'The hippo is a young baby, he was left at a very tender age and

By nature, hippos are social animals that like to stay with their

Mothers for four years,' he explained. 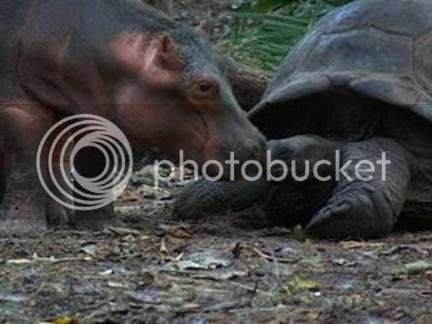 'Life is not measured by the number of breaths we take,

But by the moments that take our breath away.'

Much when we need the comfort of another.

We could all learn a lesson from these two creatures of God,

'Look beyond the differences and find a way to walk the path together.'?

That was several years ago... I wonder if the relationship is still going on? Updates? Anyone know?

That is sweet! It is amazing what animals and humans can adjust to in times of chaos.
I

Laura said:
That was several years ago... I wonder if the relationship is still going on? Updates? Anyone know?
Click to expand...

That is so cute no matter if it was a few years ago. Thanks four sharing,

Thanks for sharing! What a wonderful story.

After reading, I went searching the net for updates and came up with this site http://www.snopes.com/photos/animals/hippo.asp
It was last updated as of March 2, 2006.

Last I heard, they moved the hippo and tortoise into an enclosure that held a young female (larger than the baby) hippo. Owen and Mzee used to have a blog about them, but I couldn't find it for you. There is a children's book about them.

I've seen the children's book. What a beautiful story.
I

Thanks for the update

Does anyone of you know the name of the book?

http://www.amazon.com/s/ref=nb_ss_b...pbooks&field-keywords=Owen+and+Mzee&x=15&y=15
You can buy it on Amazon.com
I

I am going to buy one for my nephew

The name of the book is Owen & Mzee: The True Story Of A Remarkable Friendship. There has been several different ones written the second book was Owen & Mzee: Language Of Friendship Both of these were by by Isabella Hatkoff, Craig Hatkoff and Dr. Paula Kahumbu, and Peter Greste. I have both of these they are great Childrens books. I found a third book Best Friends (Owen And Mzee) By the same authors.

Here is another part of the story http://news.nationalgeographic.com/news/2006/01/0105_060105_hippo_tortoise_2.html
and then http://www.lafargeecosystems.com/blogpopup.php?entry=213
I had heard that they moved the two into a larger area and introduced the female hippo Cleo and another Aldabran tortoise and they seem to be getting along fine. They would then move the two aldabran tortoises back to the original pen of Mzee. Its my understanding that Owen and Cleo now live together.
I

Thanks for the updates Robyn

I wonder if they still see each other sometimes, I hope they do!

The love for another species

HerpDigest.org: The Only Free Weekly Electronic Newsletter That Reports on the