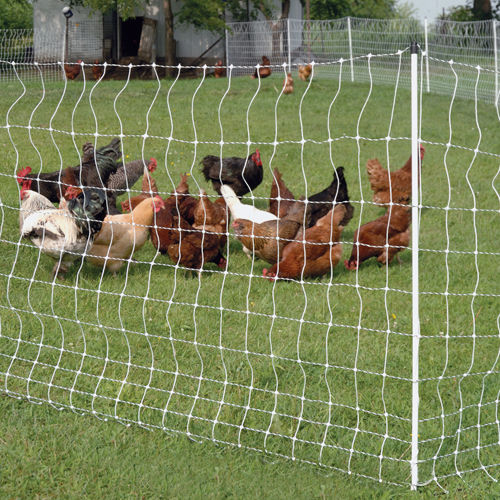 I have a fence like this temporarily set up around my cantaloupes, and a boxie ran into it, boxed himself up, and parked there, getting 2 hi-voltage shocks per second!

He hadn't been there long.
This type of fence has live wires very close to the ground. When an object like a weed comes into contact with it, it makes a snapping sound as some of the juice shorts out through the object.
Early this morning i cleared away a few weeds that had grown into it.
But later i noticed a super loud snapping as i walked by. I had walked by a few minutes before, and not noticed it.
So i walked down there to see what was causing it and there was this adult male 3-toe (judging by the shell markings) with his shell touching the wire!
Of course this could happen to a tort, too.

He was all boxed up. I put him into a container with some damp peat moss etc. and gently covered him up. He is alive and occasionally stirs if i move anything or dribble a bit of water on his back. I have him lightly covered up in peat moss. He's been like this for hours. I keep checking, in hopes that he has revived and is trying to escape.
I don't know if he's permanently fried or what.

Dang, i guess after these melons ripen i won't be using this type of fence again.
Cantaloupes are magnets to various animals out here. I guess i will need to build a concentration camp type setup with razor wire topping if i want to grow them again.

I used to have a hot wire around the chicken coop to keep opossum out. Every morning there would be a fried toad on the wire.

Hope he pulls through!
M

Last night i brought his tote inside where it would be a few degrees warmer overnight.
I put in a bowl of water and a few flowers and leaves to munch on.
I was awakened at 5:30 AM by scratching noises. He had bulldozed through the water and had peat moss all over him. Didn't eat anything.
He is such a nice specimen i wanted to take a pic in daylight. But he was so raring to boogie i let him go.

Yay! I'm glad he was okay!
You must log in or register to reply here.