Hello and Thank You, A First Time Tortoise Keeper

I wanted to introduce myself and Arlo the yellow footed tortoise, but mostly say thank you to the community because it wasn't smooth sailing from the get go. I'll share my story and how the community has helped immensely.

The journey actually begins with neither myself or Arlo (yellow footed tortoise). It actually begins with my girlfriend and her yellow bellied slider, TT. TT is an 8 year old female. My girlfriend desperately wanted another turtle, but I really didn't want another large aquarium in our townhouse. After probably a year of begging me for us to get another turtle, I proposed the idea of a tortoise. No aquarium necessary, and they seem to be a bit more sociable than aquatic turtles. She was on board and I got her Arlo for her birthday. I realize turtles/tortoises are usually terrible gifts, because most don't realize the commitment they are making but, in our case we certainly did.

I purchase Arlo, from The Turtle Source. We are both very nervous about the shipping process from FL to IL. We've read care sheets from multiple places and have our enclosure set up and we are as ready as can be.

Arlo arives, right side up and looking healthy, we are very relieved. We offer him some greens and he eats them. All seems to be going well.

This is the point where mistakes were made and the care we initially provided was not adequate. Heat, humidity and lighting eventually all needed to be changed, but we didn't know it. We had prepared the enclosure to what the care sheets called for, so we thought our enclosure would be perfect.

As far as heat goes we had initially read on the care sheets that they need a 95F basking spot and the area for sleeping should not be below 79F. We pretty much did exactly that without concern for the rest of the enclosure. Figuring Arlo would thermoregulate and use what we have provided him. He did not. We noticed that Arlo would stay in one corner all day an only move for food when provided. He preferred the cold corners too! His shell temp was usually mid to low 70'sF. This was incredibly frustrating, he wasn't using the CHE or the small heat pad in his sleeping corner. His activity level was pretty much zero. I'll talk more about the heating issue, but first we need to cover the lighting.

Lighting compounded the issue of heat. Probably a big reason for why Arlo was in the cold corners was because, those corners were opposite our coil type(CFL) bulb(s). We've used Exo Terra Repti-Glo 5.0 (UVB100) with no issues for our turtle, TT for years. Naturally, that's what we had purchased for Arlo. The care sheets hadn't mentioned coil type bulbs being an issue. In fact the care sheet from The Turtle Source recommended a Reptisun 5.0; which are available both as CFL and linear tubes. We noticed the skin around Arlos eye turning white. Picture: 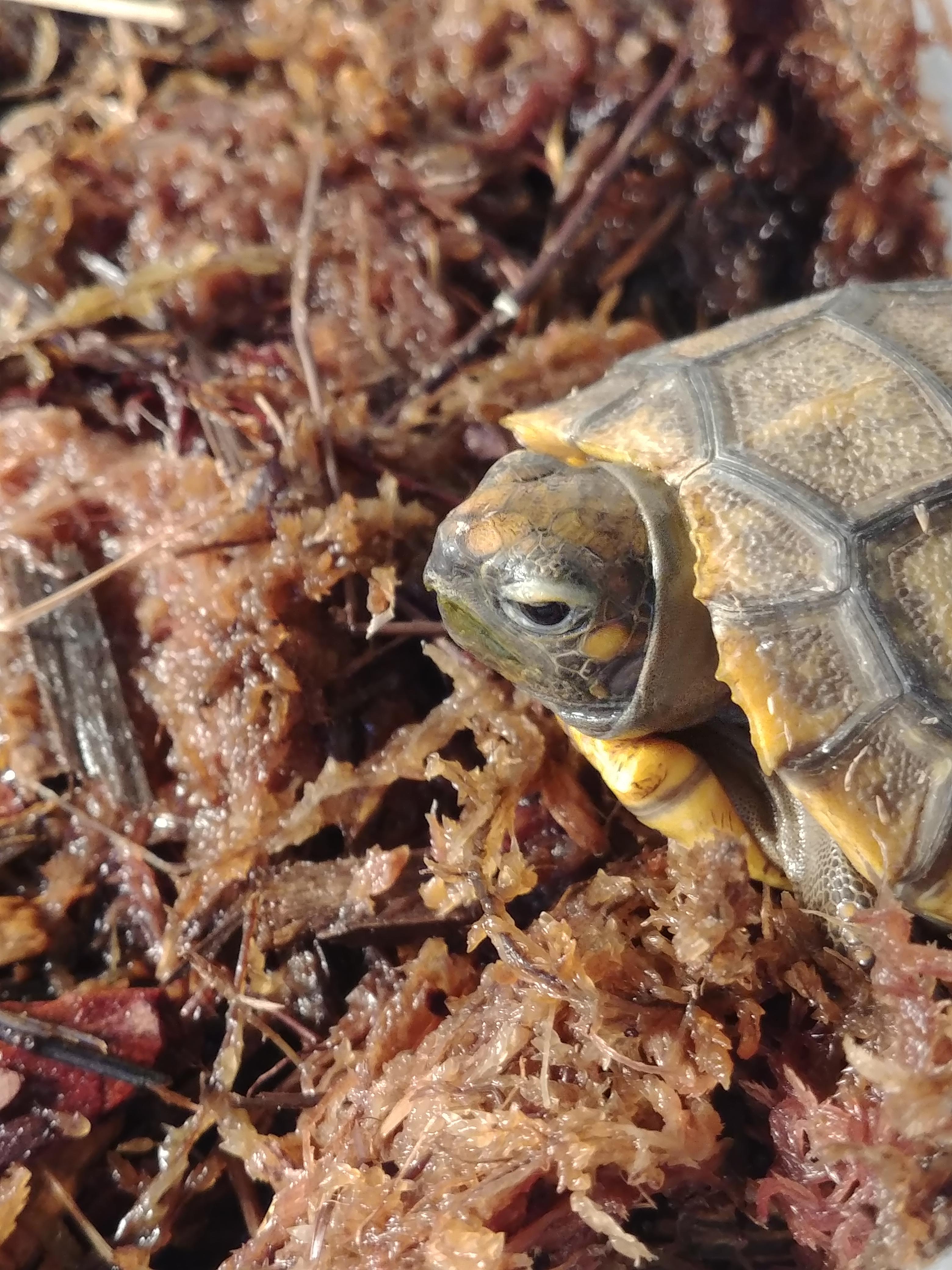 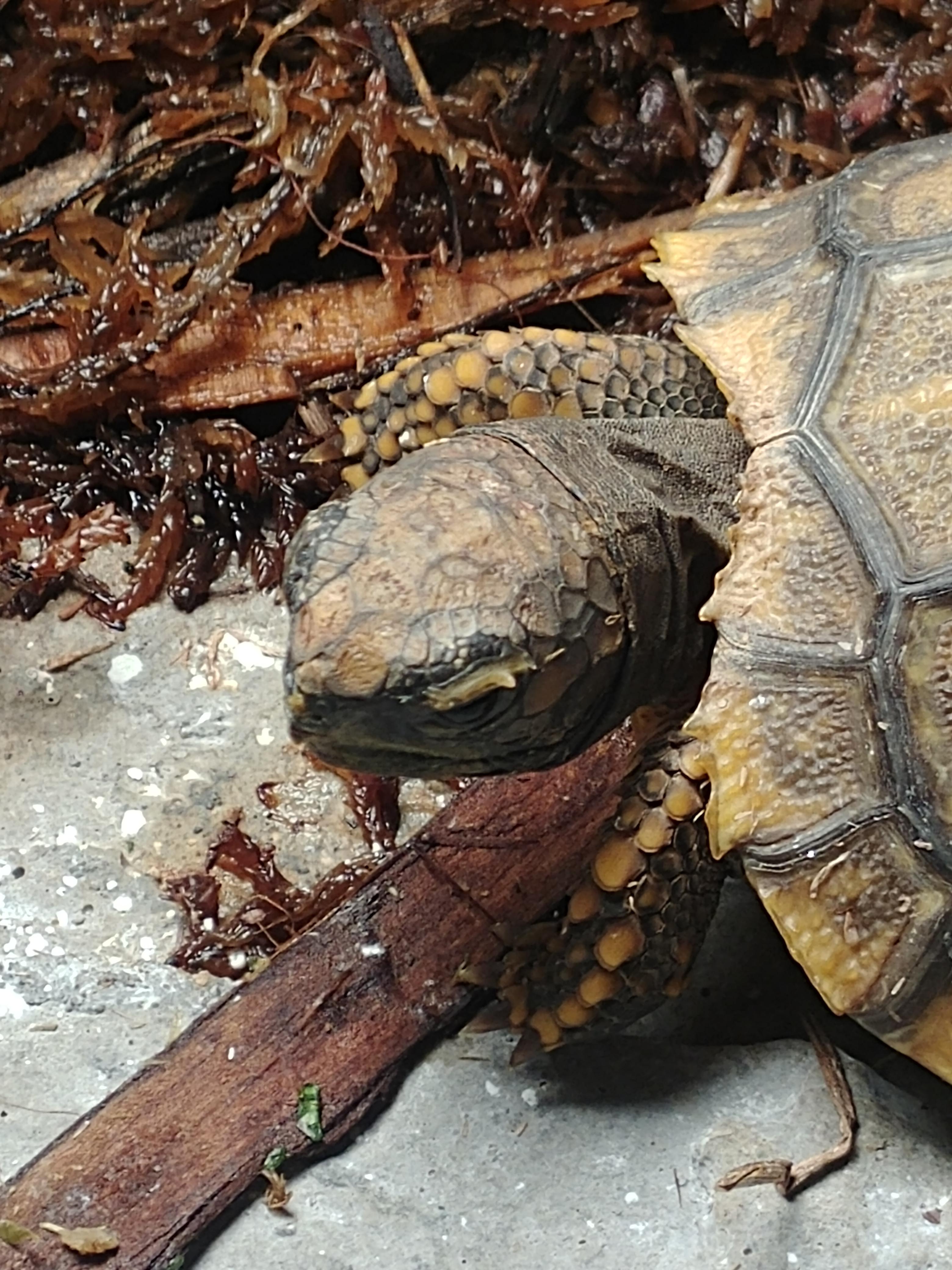 Eventually the scabs fell off. We were very concerned, but weren't sure of the source of this, though I'm sure it would be obvious to experienced tortoise keepers. However in our situation, we hadn't heard about the CFL issues, we have used these bulbs for years with our turtle, and the care sheet seemed to recommend a CFL. We downsized the Exo Terra UVB100 from 26w to the 13w version. Hoping to solve the eye issues. I can't remember how long we used the 13w Exo Terra, but I ended up purchasing a 3rd CFL, the one I thought was recommended, a Zoo Med Reptisun 5.0. Arlo still seemed to avoid the CFL and we noticed the beginnings of the same eye issues previously. About the time when i purchased the third bulb, I had come across the CFL issue in my research. I think we only used the third bulb for a few days at an increased distance before removing it. At this point my girlfriend and I figured no UVB was better for Arlo and we needed to get it right this time. I had already begun looking at every spec sheet from Exo Terra and Zoo Med regarding their UVB bulbs. This was the most confusing part. Zoo Med Sheet Here. Searching Exo Terra's site, shows the 13w UVB100 is the bulb that emits the lowest UVB(3 out of 5 on their index). I was very confused, as according to the manufacturers I was already using the lowest output bulbs available. What was I going to do, put a linear bulb that output more UBV in with our tortoise that is already experiencing eye issue? That seemed crazy!

A quick tangent from the lighting discussion. It was about this time when I realized that most tortoise care info is geared towards the desert species. I didn't think the red foots and yellow foots made up such a small percentage of captive tortoises. I figured it would be 50/50 desert species and forest species. It seems like the forest species make up about 25% or less of captive tortoises. Which makes only about 25% of the info relevant to forest species. Again, obvious to experienced tortoise keepers, but not first time keepers. I didn't realize how different care is between the two species either. Once I found the "Redfoot and Yellowfoot Species" sub-forum here, things started to finally make sense!

A breakthrough! I now understood Arlo's needs much, much better. Once I realized he needed much different care from a desert tortoise. Prior to this I believed the only differences required was higher humidity and different substrate. I now understood that Redfoots and Yellowfoots aren't out in the hot sun mid day. Thermoregulating in the hot sun isn't something Arlo would normally do. This also put the lighting into perspective, an overly bright enclosue with lots of UVB isn't normal for Arlo either. And finally, I understood that large temperature gradients aren't what Arlo would normally encounter either. 80-85F everywhere was now the new goal.

This is where things start to get better. We purchased a new much larger heating pad and set it to keep the substrate around 82F day and night(measured at the substrate, not the thermostat). Arlo's activity level began to increase slowly over the next week. He was moving around on occasion! We knew this we were on the right track now. We noticed a difference in his posture too. His head was held higher now. He used to almost always hold his head only slightly out of his shell. It felt like we actually had a pet now, not just an animal we were keeping alive. Picture: 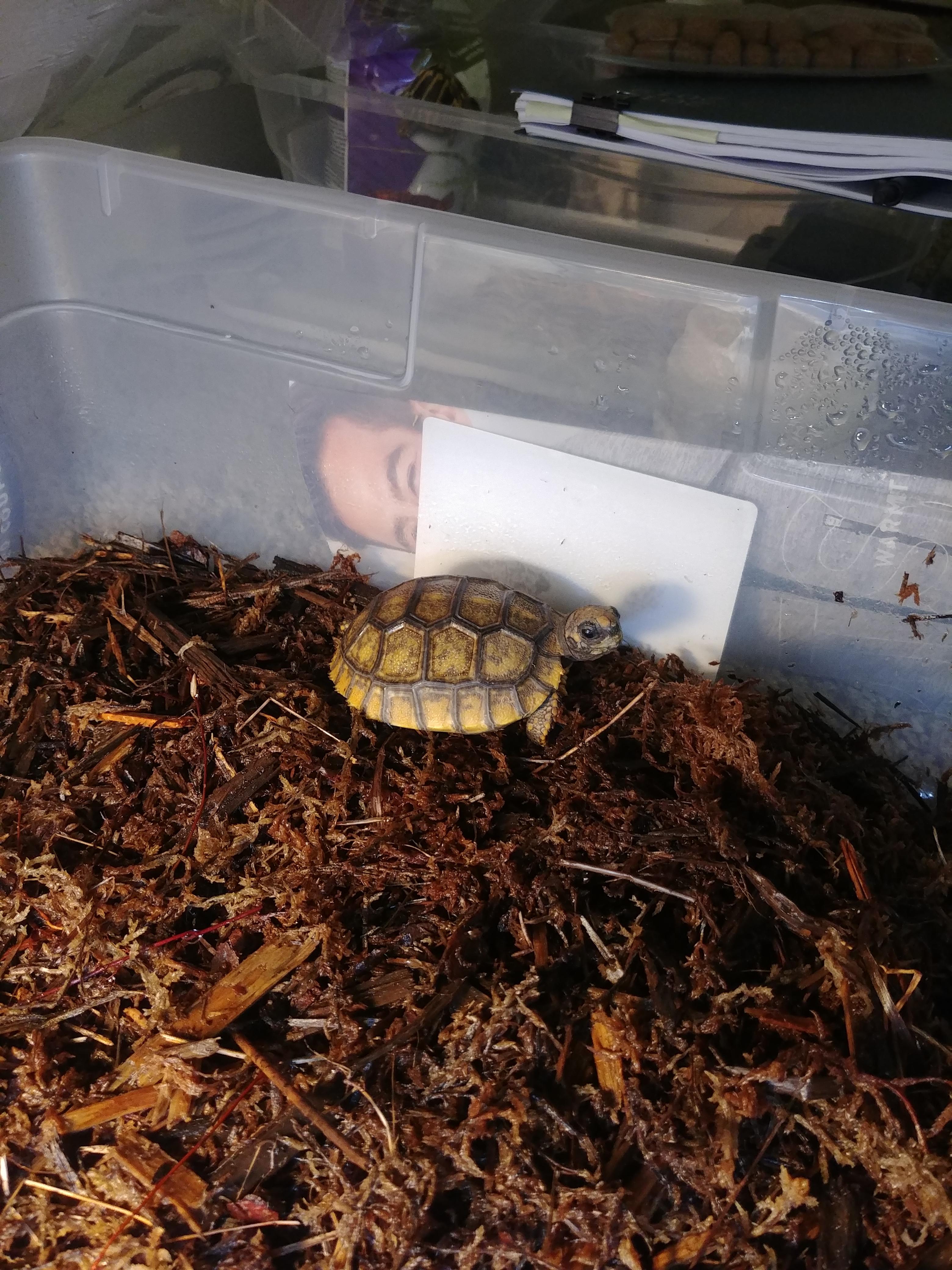 The lighting issue is now resolved as well. I went with a non-standard product, this Shadedweller kit made by Arcadia. The smallest linear bulbs were still 22" in length. Arlo's current enclosure is 16" x 22". I really, really didn't want to have a UVB bulb that didn't give Arlo the option for shade. This 12" bulb with low (7%) output seems to be a good fit for juvenile redfoots and yellowfoots. We keep it on all day and Arlo doesn't avoid it and hasn't had any eye issues. Success! Picture of healthy eyes: 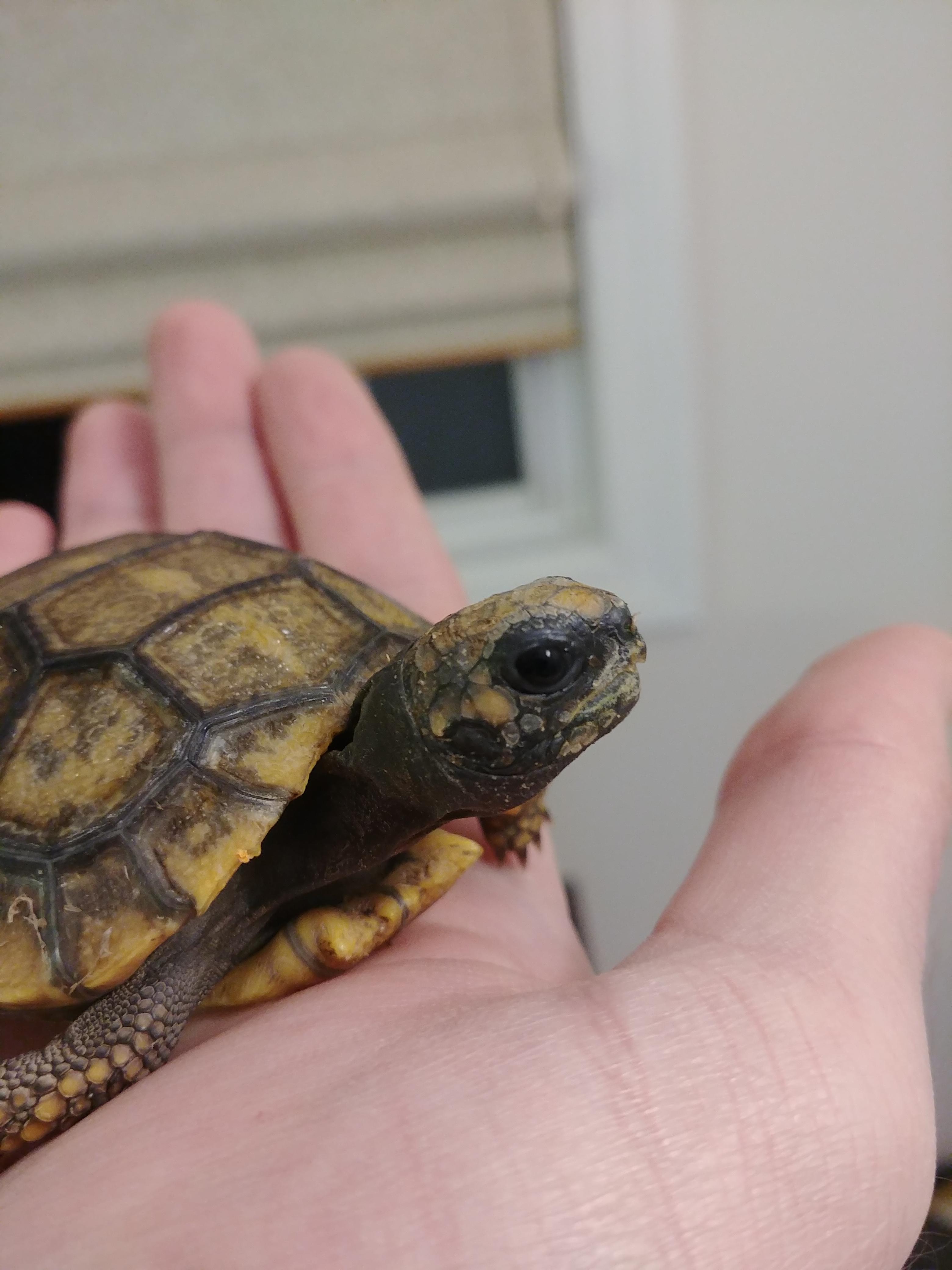 I wanted to share this story for a few reasons, the first being that despite the strong anti-coil / CFL bubl sentiment here, there really aren't many pictures of eye damage or proof of issues. I was only able to find one source showing the eye damage caused by CFL UVB bulbs(here). With online forums usually being a hotbed for gatekeeping and product fanboy-ism, I feel the community needs to provide proof of why CFLs are damaging. A few pictures of tortoise eye damage here, and I wouldn't have tried 3 different CFL's. Second, I wanted to share because I made some classic mistakes and hopefully other first time tortoise keepers can learn from my mistakes. Especially if they are first time redfoot or yellowfoot keepers.

Thanks to everyone for providing the information to properly care for Arlo.

I wanted to note that despite all of the issue's we had with Arlo's initial care, he was always eating, pooping and gaining weight. So while we knew it wasn't ideal, his situation never seemed like an emergency.

Hi, and welcome to the Forum!

I also have YF tortoises. It's a wonderful species and you're going to enjoy the heck outta' Arlo. Thanks for sharing your story. The problem with a thread devoted to the CFL bulb, with pictures, is that most folks who discover the eye problem are new members and don't really know how to post pictures yet. Your idea is a good one, and I'll try to start gathering pictures for a future thread.

According to the folks who manufacture the CFL bulbs, the eye problem has been fixed. But there was never a recall, so the original bulbs are still on shelves all across the land.

Yvonne G said:
Hi, and welcome to the Forum!

I also have YF tortoises. It's a wonderful species and you're going to enjoy the heck outta' Arlo. Thanks for sharing your story. The problem with a thread devoted to the CFL bulb, with pictures, is that most folks who discover the eye problem are new members and don't really know how to post pictures yet. Your idea is a good one, and I'll try to start gathering pictures for a future thread.

According to the folks who manufacture the CFL bulbs, the eye problem has been fixed. But there was never a recall, so the original bulbs are still on shelves all across the land.
Click to expand...

Thanks Yvonne, we really are enjoying watching Arlo grow. I can't wait for him to be a bit bigger and a little less fragile, but at the same time he's very cute right now.

I agree, documenting eye damage is certainly no easy task. It's a tough combination where it's only figured out through hindsight. I think our familiarity with UVB lighting with our turtle helped us understand and have enough foresight to document the issue.

I'm very skeptical of the manufacturers claims of "fixing it". I imagine, when you consider all the reptiles(snakes, lizards, tortoises, etc) that these bulbs are marketed and used for, the percentage of issues is probably pretty low. I would guess below 2%. That's probably not enough pressure for the manufacturer to actually make a change. If the manufacturers actually made a change, you would think we would see at least one manufacturer have a bulb that had a part number that included a revision specification. I've worked in quality control, and batch numbers, revisions, and all of that record keeping is very basic stuff that every manufacturing business does. Like I said,I'm skeptical and the whole situation seems fishy to me.
You must log in or register to reply here.
Share:
Facebook Reddit Pinterest Tumblr WhatsApp Email Link