Is there a predatory fish that could be kept in a 80 gallon tank ?

Without any other fish besides some feeder for a few seconds

Location (City and/or State)
South of Southern California, but not Mexico

The KING of predatory fishes.
And not just the nastiest. They are the most colorful and possibly the most intelligent.
FLOWERHORN Cichlid.
(And don't use feeders. They transmit diseases)

Snakehead... South american cichlid, they look mean and are mean

Snakehead... South american cichlid, they look mean and are mean
Click to expand...

But they'll outgrown an 85 gallon in one year.
They're wild here in Florida.
Better for a pond or a giant aquarium.
M

I had an oscar years ago. He lived in a 50 gallon aquarium for a very long time. Occasionally I would get up in the a.m. to an empty aquarium. Searching all around on the floor I would eventually find him. He'd be dry with carpet fuzz stuck all over him, but would come back to life within a few minutes of being put back in the water. His aquarium was covered first with the light/hood, then with an aluminum strip that covered the part the hood didn't cover. I guess he jumped with such force that he knocked the hood or strip high enough for him to jump out. He was a very enjoyable addition to my living room; would eat right out of my hand.

I also kept a pair of Jack dempseys (not at the same time as the oscar). They would spawn and fry would hatch. There was a ceramic frog ashtray in the aquarium with a large, open mouth. The babies would stick around that frog and when threatened, would either go into the frog's mouth, or mama fish would gather them all up in her mouth. First time I saw her do that scared me to death. I thought she was eating them, but no, just protecting them from danger. The pair never got as tame as the oscar, but were just as enjoyable to watch, none-the-less. 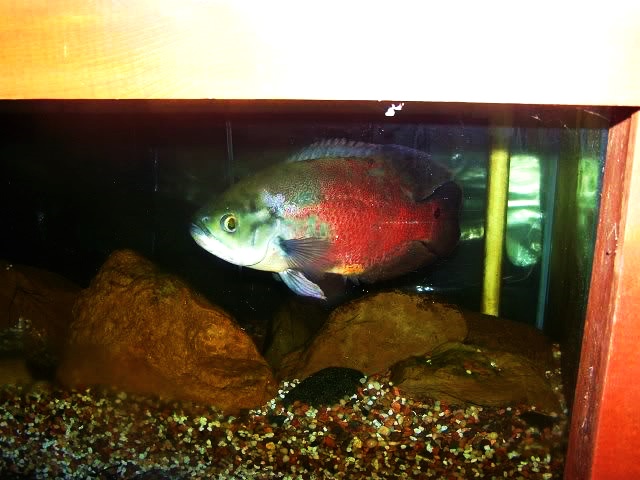 I don't know why Oscar's breach like that. But I've had "glued to the carpet" Oscars in the past, too.
Itd be important to make sure that the electric lighting can't fall into the water when one jumps up into the lid.
You must log in or register to reply here.