Hi! I'm going to get a red foot tortoise, and i really like the idea to create a vivarium for it, I've been researching and came across with the basic of frogs vivariums, so I was wondering if that could apply for this kind of tortoise in particular, here is an image for example: 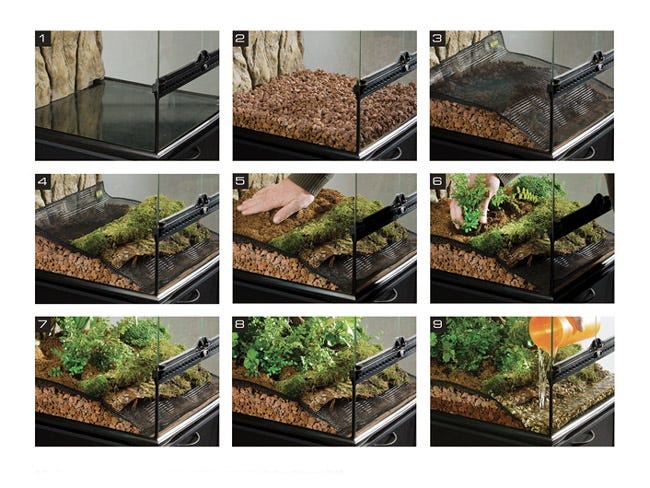 A warm welcome! Sadly no. A redfoot needs constant humidity of 75-85 range. Temps 80-88. Torts do not know the concept of glass. On top of which that is way to small.

I need to clarify that I meant to discuss more about the substract than the size, so I could grow planta there and mantain the right humidity, specially for a hatchling.

That is not appropriate. The substrate needed is top soil or coco coir. You need atleast a 3x2 enclosure.

You will have better luck keeping the plants in their own pots and sinking the pot into the substrate.

Hi there,
Some readers/responders might be misunderstanding what you're going for. My tortoise lives in a viv, otherwise known as "bioactive substrate". The pictures you shared show a sloping down into a water feature, which wouldn't really work, but everything else is pretty much the same.

My tort's drainage layer is currently lava rocks in her old enclosure, but with the new one I've used the clay pebbles like in those pictures. On top of that I put the weed mat, then a mix of organic topsoil and coconut coir. A layer of sphagnum moss on top of that is a good idea too as it keeps the moisture in the dirt longer, while keeping the tortoise dry. The idea is to keep it humid but not wet, because sitting in wet can cause shell rot.

The drainage layer can be anywhere from 1.5" to 3.5" deep. I opted for shallower because I wanted there to be more room for the dirt (5 to 6 inches if possible). But it also depends on how big the enclosure is and how much water you pour in.

Now for the bioactive part! I have earthworms and isopods (we call them pill bugs here but others call them rollypolies or wood lice). I will be getting some springtails again soon too, I hope. But even just the bugs I do have are excellent. I bought the worms at PetSmart but only because I wanted a bunch of them at once and I don't have a bait shop near me. The isopods I gathered outside. I started with 15 to 20 of them and they multiplied pretty quickly. Since it's a redfoot tortoise too, it gives her something to hunt for. Isopods are incredibly stupid though and will drown themselves in the water dish.. So just be aware of that, but they should multiply enough that the odd drowning shouldn't affect the population very much. [emoji6]

The beauty of this setup is that you rarely, if ever, need to do a thorough cleaning. The bugs take care of leftover food scraps and poops, leaving lovely compost behind. The enclosure never smells bad but maintains that wonderful earthy smell. It's a good idea to break up and mix the soil around every so often, because the tort will pack it down. And for the first few months, while things get going, you might have to remove some poop and leftover food (if there is any) until the critters can keep up.

I hope this helps!

Granted this is the new enclosure and is a work in progress. She's still in her old one until the grass starts to grow and I fix the heat.. The humidity in there is perfect but the temperature is too low. I'll be adding a CHE soon.

Did you make holes in the weed mat? Or how I can select a good weed mat for drainage?

Gerrd21 said:
Did you make holes in the weed mat? Or how I can select a good weed mat for drainage?
Click to expand...

If you blow up the picture you can see it's perforated already. Most will allow water through but not much else.
You must log in or register to reply here.