Which Baby Tortoise Do I have? -A Pictorial Guide to Differentiating Baby Mediterranean Tortoises 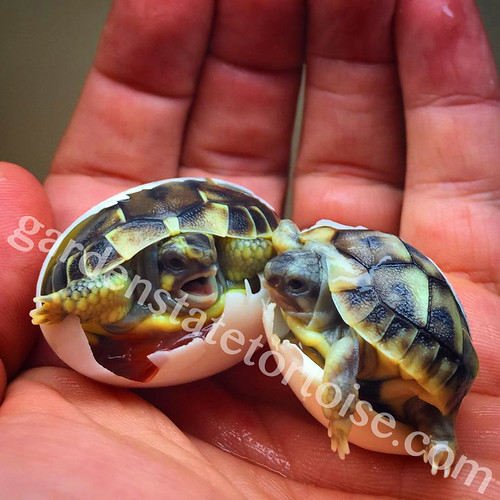 BabyTortoisesHatching by GardenStateTortoise, on Flickr​
We’ve come a considerable distance in understanding tortoises, their care and identification but we still have a long way to go. As good as we’ve gotten, there are still a few of the same mistakes being made on a regular basis. One of these mistakes is the misidentification of tortoises particularly babies belonging to the genus Testudo. These popular Mediterranean species and subspecies are all quite similar in appearance. While some stand out above others, some are almost identical to a certain extent. Although the care of these different types of tortoises is often comparable, there are those that require much different husbandry methods. Improperly identifying one or more of them can lead a keeper to housing them inadequately and this inevitably ends in a painful, disheartening experience for both the tortoise and the owner. All too commonly a false identification is given and I have seen this recently climb to an alarming rate. Someone posts a photo asking what type of tortoise they have and within minutes, countless comments are strewn about when in reality, maybe only one or two of them are correct, if any. The high number of incorrect answers thus overshadows the correct ones and the owner now accepts the wrong identification. Sadly, there are far too many “tortoise experts” these days who are quick to make a statement before actually thinking or doing the research themselves. I’ll say it again, in this hobby/field/industry, there is no such thing as an expert. The tortoises are the experts and we just need to learn better.


The following is a pictorial guide to help the community properly differentiate hatching Mediterranean/European species of tortoise belonging to the genus Testudo.

This tortoise is quite possibly the most popular and commonly seen of the Mediterranean crowd. Easily obtainable, they are often available from captive breeders across the globe. As babies, they exhibit a brown, tan or yellow-brown carapace with brown and black markings on each scute that border the ground color. The shape is generally round with a less conspicuous dome. The head and legs are typically dark gray with some highlighted areas with dark nails. The plastron is cream to yellow colored with a black blotch on each plate. These blotches are usually completely separated from each other and do not form bands or stripes however, more often then not, they are continuous. The supracaudal shield (the scute just above the tail on the carapace), may or may not be divided. A tiny spur or horny tip is visible at just the very tip of the tail. Inguinal scutes which are small, triangular scutes, found in front of the rear legs, on each side of the under side of the tortoise where the plastron meets the carapace are usually present. However, they may be lacking one or both in some examples of the Dalmatian variant of this tortoise known as Testudo hermanni hercegovinensis.

There are many subspecies and variants belonging to this species of European tortoise so I have chosen to use the most popular and familiar one, the Asia Minor or "ibera Greek" tortoise. All Greek tortoises share some staple traits that distinguish them from others and usually only vary in color or shape or both. The Greek tortoise is a bulkier animal typically with a large head and big eyes. The snout is blunt on a wide head. They will usually have one or more yellow-green or cream colored markings on the head. Some may have one noticeable spot at the top while others may have an entirely colored head. The scales of the limbs may or may not be colored this way as well. Usually, the skin is not as dark as what is seen in the Eastern Hermann's tortoise above until the are much older. The carapace is arched significantly giving the babies an easily visible dome. Ground color of the carapace is brown to yellow or cream to horn. Bordering dark areas are sometimes few or abundant making the tortoise appear very dark. Usually the center of each scute is marked by a dark spot that may or may not bleed into the surrounding dark bordering areas. The supracaudal shield is usually not divided but may be in occasional specimens. Tiny spurs numbering 1 or more are visible on each thigh. As babies, these appear as tiny light colored scales. With age, they will grow into pronounced spurs or tubercles. Don't forget, the Greek tortoise is also called "The Mediterranean Spur Thighed tortoise". The plastron is light colored and may or may not exhibit dark areas. They usually do not have the formation of a black blotch on each plate like Hermann's tortoise but rather will have mottling to some degree generally in the center area. Take note that some Greek tortoises have no markings on the plastron at all. As neonates, Greeks tend to be quite plump. They are little fat things that come out of the egg this way, not to put too fine a point on it!

Generally accepted as the largest of the Mediterranean tortoises (although some Greeks will rival them), the Marginated tortoise is easy to spot as an adult, but not always as a baby. They take on the typical Testudo look with a light colored shell with darker borders but one main trait separates them. On the plastron, chevrons appear facing downward towards the tail on each side. They are triangular shaped and brownish colored on a cream plastron and cannot be ignored. They may number 6, with 3 on each side. The ground color of the carapace is often lighter then that of Hermann's or Greek tortoise and can actually be almost white. They do not have any dark markings in the center of each scute, only dark borders. As they grow, the dark borders take on a mahogany stain before turning to black when they are much older in life. As adults they are black tortoises with a center marking on each scute that is either cream, orange-ish or yellow. Fortunately, adult Marginated tortoises exhibit very strong flaring of the rear marginal scutes which actually gives them what we call a "skirt" and this makes them stand out above the rest (although many Greek tortoises also feature heavy flaring of the marginal scutes). As babies, Marginateds do not show the "skirt" whatsoever so we must go by the chevrons on the plastron and the lack of central dark markings of the carapace scutes. Skin is brown-grey with some highlighted cream colored areas.

The smallest of them all, the Egyptian tortoise may appear as a tiny, sand colored Greek tortoise, but it certainly is not. They are born with a highly arched carapace that is cream-sand colored with mottling or darker sidings on each scute to various degrees. The head, legs and soft parts are all cream to sand colored as well with even lighter areas. Sometimes the soft parts of the skin can be almost white or slightly transparent. No thigh spurs are present and there is no terminal claw or tail spur as seen in Hermann's tortoise. Like the Marginated tortoise however, the Egyptian features chevrons on the plastron but usually only 2, that may fade with age. The Marginated keeps these chevrons throughout life and they are easily noticeable even in ancient adults. 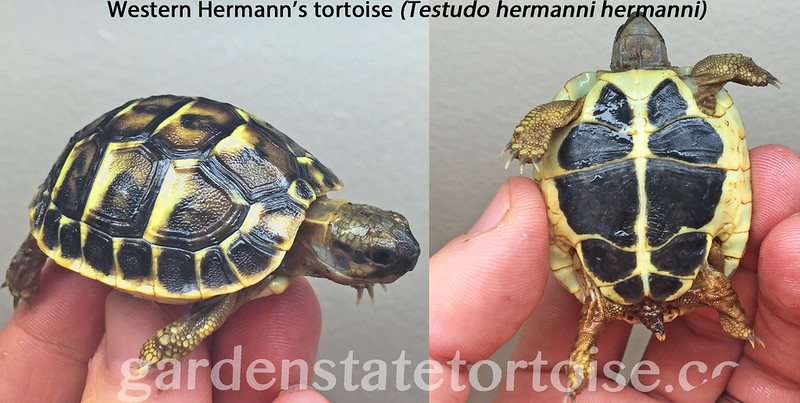 Usually the most colorful of all the European tortoises, the Western Hermann's holds some unique traits that help set it apart. The carapace is moderately domed even in the first stages of life but not usually as prominent as in the Greek tortoise. The ground color generally starts off as a greenish yellow that is slightly fluorescent (this turns to a rich, vibrant golden yellow with age). It is bordered by strong, black markings which create a high degree of contrast. The fourth vertebral scute always has a dark central spot which is many times lacking in the Eastern Hermann's tortoise. Right out of the egg the Western Hermann's features a symbol that is reminiscent of a keyhole on the fifth vertebral scute. The supracaudal shield is always divided. The plastron is yellow with a black blotch on each plate, These blotches are sometimes already fused at hatching but at the very least will start to fuse as the tortoise grows. The fusion of the blotches creates 2, longitudinal stripes or bands that run parallel along the midline of the plastron. They are well formed and sternly defined. No other species of Mediterranean tortoise features this to such a degree. Only the Eastern Hermann's tortoise may exhibit something similar to this but without true definition or formation. The skin and soft parts are yellowish with select darker areas. The nails are light or clear. The sleek head has a pointier snout and a bright yellow sub ocular spot is found on each side of the head. This is also seen in baby Eastern Hermann's tortoises but will fade with age. Most Western Hermann's keep it throughout life only losing it in elderly years if ever. Western Hermann's tortoises do feature the terminal claw or spur at the tip of the tail and usually do not have thigh spurs except in some geographical variants such as those found in Sicily, Italy.

Comparison Photos
In each of these photos, the most well known Mediterranean tortoises belonging to the genus Testudo are pictured along side each other. They are organized from left to right from most common to least common at least in American collections. After reading the descriptions above, you can take note as you compare them to each other here. They may vary in age slightly so size is not of any use in these images. 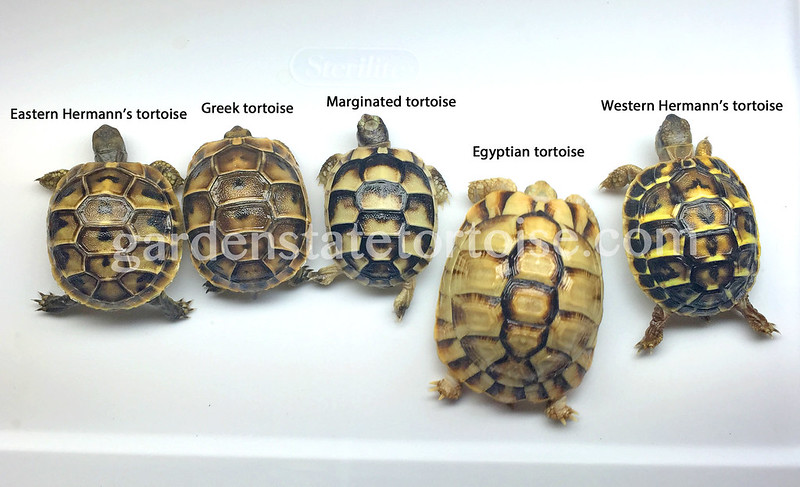 
Conclusion
The intent behind this thread is to help clarify some of the misidentification issues that currently take place more often then we think. The proper identification of tortoise species and subspecies is more important than ever and it is our responsibility as enthusiasts to know as much as possible. I hope this thread reaches a wide range audience and I urge everyone to share it everywhere as much as possible. I am always available through either of my sites (gardenstatetortoise.com & hermannihaven.com), on this forum and via e-mail to answer any questions and directly help identify tortoises. My knowledge does not stop with Mediterranean species only, we breed a large variety of tortoises here and are very capable of properly identifying any of them so please, do not hesitate to ask anything.

Care information on these species and more is available on my site gardenstatetortoise.com

..and a closer look at anything Hermann's tortoise related can be found on my other site, hermannihaven.com

Lastly, please visit us on YouTube for differentiation videos concerning some tortoises as well as other videos: youtube.com/gardenstatetortoise​

Moderator note: If you feel the need to ask questions about this thread, or talk about it, please start a new thread or contact the original poster, OP, by private conversation.

Which Baby Tortoise Do I have? -A Pictorial Guide

How to Identify Hermann's Tortoises